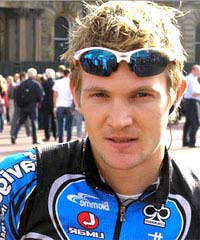 Alex Dowsett is a young man going places, having emerged as a rider with the potential to make the British Olympic cycling team at the 2012 games. Of course, there is still a lot of hard work, and many miles to be negotiated, before he can secure one of the sought after places in the squad aiming for gold in London. However, the 21-year-old has already displayed a determination to succeed, having been diagnosed at an early age with haemophilia, an inherited bleeding disorder where there is a partial or complete absence of clotting factors.

The condition almost exclusively affects boys, although female carriers may present with varying degrees of a bleeding tendency, too.

“Severe Haemophilia is characterised by spontaneous bleeding, or bleeding provoked by very minimal traumatic injury, into joints and other tissues from an early age,” says a spokeswoman for the UK-based Haemophilia Society. “The most common sites of bleeding are into the knees, ankles and elbows but it may occur anywhere in the body, including the brain. In the past when treatment was less available, these bleeds caused long-term damage to the joints or muscles and led to chronic pain and disability . . . People living with mild haemophilia tend not to have any permanent damage to their joints.”

There are around 7,000 people with the condition in Britain; globally, around one in 10,000 boys is affected, she says.

Despite the problems associated with haemophilia, a diagnosis is no barrier to enjoying the full benefits of physical exercise, according to the spokeswoman: “People with haemophilia are encouraged to stay fit and healthy as much as possible. They have access to specialist physiotherapists via their haemophilia centre who can give advice on what sport/exercise will suit their individual needs,” she says. “Children and younger adults who have had access to preventative treatment throughout their growing years may be free of any problems relating to their haemophilia, and able to participate in most physical activities.”

So what types of activity are advisable? “There is still considerable debate amongst the professionals caring for those with haemophilia, about what sports and activities should be undertaken. There is an absolute consensus against full contact sports like rugby, boxing and some forms of martial arts. Some professionals advise that football can be practised at a skills level but not competitively; however there are boys playing football at competitive levels across the UK. Other sports being practised at a competitive level by people with haemophilia include athletics, cycling, golf, cricket, tennis, badminton and basketball,” says the spokeswoman.

“Advice should be sought on an individual basis, but generally in those who have no pre-existing joint damage, most sports and physical exercise are possible as long as there is good preparation including the wearing of appropriate protective clothing, the right kind of footwear and warming up and post-activity stretching.”

Another safety measure, says the spokeswoman, is a ‘medic-alert’ bracelet or necklace stating that an individual is a haemophiliac. This can aid a nurse or doctor treating a sports-related injury who would have no previous knowledge of a patient’s medical history. “However the most important thing is that somebody else on the team or among the staff knows about their condition and what to do in the event of an emergency,” she says. “First aid for people with haemophilia is the same as for anyone else, however they will almost always need to have factor treatment fairly soon after an injury.”

Whether Alex Dowsett succeeds in winning gold in 2012, he has already achieved a great deal by proving that a diagnosis of haemophilia does not mean an individual cannot compete to a high level in the sporting arena, a point reiterated by the spokeswoman for the Haemophilia Society: “It is most important that those running sporting activities understand that with modern haemophilia treatment and management, people with haemophilia are becoming more able to participate in sport alongside their peers.”