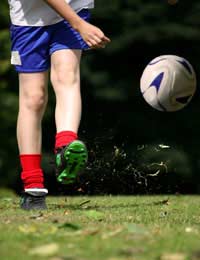 Ask a young boy in Britain what he wants to be when he grows up and there’s a fair chance that professional footballer will be somewhere near the top of his list. There has never been a shortage of wannabe footballers in the UK and the increasingly lavish lifestyles of the top players can only entice others to dream of fame, fortune and football.

But there is an ugly side to the beautiful game, as Davie Young knows only too well. He was just 14 years old when a horrific injury dashed his hopes of becoming a top-class player. By the time Davie had recovered, the professional clubs that had been following his progress were no longer interested.

“At the time, I was playing for a boys’ club as well as the school team,” said Davie, now 27. “I was a pretty quick centre forward and was scoring plenty of goals. Because of that, some of the local football scouts became interested and a few professional clubs were watching me closely, including a couple of established English Premier League clubs.”

“My dad and one or two of my teachers tried their best to keep my feet on the ground. I was always reminded that very few young players make it into the professional ranks, and told to keep working hard at school so that I’d have academic qualifications to fall back on. To be honest, I didn’t really pay much attention, because all I wanted to do was become a professional football. I was confident I could do it and extremely dedicated and determined.

“But then my whole world fell apart in a split second. I was playing in a school match on a quagmire of a pitch. It was February, cold and drizzly, and I had scored the only goal of the game. There were only a few minutes until half-time and then I got clattered by this huge lump of a centre half.”

“I can’t remember too much about it, to be honest, because I blacked out. Later on, I was told the centre half had come in with a high tackle, coming over the ball and crashing into the side of my lower left leg. My boot was firmly planted in the boggy pitch and so my leg took the full weight of the tackle. I suffered a double fracture and woke up in hospital.”

“It was a really bad break and I can still get a bit of pain in the leg now. I did play football again, but it was more than two years later and by that time I had lost my chance. The scouts were no longer interested and, to be honest, I can’t blame them. There’s no doubt the injury left mental scars and I wasn’t the same player. Besides that, the other players had moved on – improved so much in the time I had spent on the sidelines.”

Davie now works as an electrician and the only football he plays is the odd kickabout in the park with his young son. “The fact that I’d neglected my schoolwork, and was then on such a massive downer when I broke my leg, meant I didn’t get enough qualifications to go to university,” he said. “In hindsight, I should have listened to my dad and teachers, but at 14 you think you know it all. The problem with football as a career choice is that, even if you’re good enough to make it, one bit of bad luck can ruin everything.”