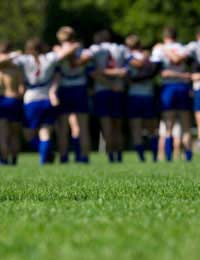 When he looked out of his bedroom window one cold November morning, Allan Waugh was happy to see the sun shining through wispy, non-threatening clouds. Conditions looked perfect for a game of rugby union. He didn’t know then that it would turn out to be his last game of rugby and that a horrific sporting injury would leave him in a wheelchair for the rest of his life.

“I played at hooker for the 4th XV of my local club,” explained Allan. “It was what I’d call recreational rugby. Put it this way, none of us was going to be called up to play for England, but it was a lot of fun and most of the lads shared a few beers and a few laughs while they liked their wounds after the match.”

“We were playing at home that day against the 3rd XV from a smaller rugby club not too far away. All these guys had day jobs and there was a full range, from doctors, lawyers and accountants to chefs, bricklayers and postmen. The game itself wasn’t too eventful until a scrum collapsed and I couldn’t get back up.”

“I was lucky that a member of the opposing team was a doctor. It seems strange to say this now, knowing what the eventual outcome was, but at the time I didn’t feel in a huge amount of pain. Maybe because of that, I wasn’t aware the injury was as serious as it was. It could have been worse, too. If anyone had tried to move me, I may not be here today, so in a way I owe my life to that doctor.”

Several weeks later, doctors gave Allan their verdict. By then he was expecting the worst and the bad news came as no surprise. “They told me I would never walk again,” said Allan. “News like that affects you in a big way, even when you’re expecting it. It’s devastating, no doubt about it. It’s a hard hit to take and it had a big impact on me.”

“That was years ago now – it seems like a lifetime ago – and they say time is a healer. When I look back on what happened, I’m not bitter about it. As far as I am concerned, it was an accident, pure and simple. These things happen in life and no-one is to blame. It can be hard to take, of course, but eventually you realise that you have to get over it and get on with your life. After all, what else can you do?”

“People expect me to hate rugby now, but I’m still a big fan. I love the Six Nations and the World Cup and watch as much rugby as I can on the television. A lot of my very best friends are rugby fanatics and these people are still my friends and always will be.

“If I had my time over again, would I play rugby? It’s not the first time I’ve been asked this question and the answer has never changed – yes I would. My son plays rugby and I’ve done nothing to discourage him. Quite the contrary, in fact – I want him to play rugby. As far as I am concerned, playing rugby helps a man develop many life skills. The sport has enriched and enhanced the lives of thousands of people over the years.”