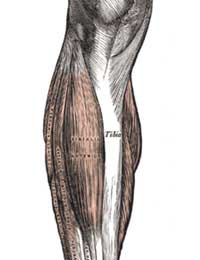 As sports injuries go, shin splints is not one of most serious. It can be painful, though, and, as runner Alison Renwick discovered, can be a recurring problem. Alison was a keen club runner, but took a break from sport soon after her marriage to concentrate on having a family. When she decided to return to training after an eight-year gap, Alison was stopped in her tracks by shin splints.

“It was pretty obvious what the problem was,” said Alison. “I had swelling and pain in my lower legs and the insides of my shins felt tender. The pain would ease if I rested for a while, but would return with a vengeance as soon as I started running again.”

“I’d not experienced shin splints before, but I knew plenty of runners who had suffered. The advice I got was apply ice in the early stages, in order to reduce the swelling and pain, and then to rest to allow the injury to heal.”

“I followed the advice to the letter, but soon after I started running again the shin splints returned. Quite a few times I thought I had got rid of the problem, but sooner or later it returned and it gradually got worse. The pain was excruciating if I bent my foot or toes downwards, the insides of my shins turned a pinkish-red colour and there were lumps and bumps on the inside of my shin bones.”

“It got so bad that I contemplated giving up running altogether. The more trouble I had with shin splits, the more I researched the subject. I tried a whole range of treatments, such as applying heat to increase the flow of blood to the tissues, and wearing a shin and calf support to reduce the strain on the muscles.”

“Rather than running, I was doing a lot of non-weight bearing exercises such as swimming, running in water and cycling to keep fit. I kept stretching the muscles in the lower leg and wore shock absorbing insoles in shoes to ease the strain. But no matter what I did, or how long a lay-off I had, as soon as I started running again, the shin splints returned.”

“Eventually, I felt as though I had no option but to seek professional advice, so I visited a sports injury clinic. I suppose it was the cost involved that put me off going to a clinic earlier, although now I wish I had.”

“During the first consultation, the physiotherapist wanted to know what symptoms I had suffered and what types of treatment I had already tried. The physio explained that a recurring injury like mine can be due to tension in the muscles at the back of the lower leg. Rest may seem to solve the problem because the pain in the shin disappears, but unless the muscles are treated the pain can return.”

“The physio suggested a course of sports massages to make the muscles supple and more effective at absorbing any stresses placed on them. It worked a treat and now I have regular massages to keep supple, even though I’ve had no recurrence of the shin splints problem. It’s fantastic to be able to run without worrying about injuries and I’m so glad I didn’t have to give up the sport I love. My only regret is that I didn’t visit the sports injury clinic earlier.”