Home > Case Studies > Curling Under the Influence Led to Injury: A Case Study

Curling Under the Influence Led to Injury: A Case Study 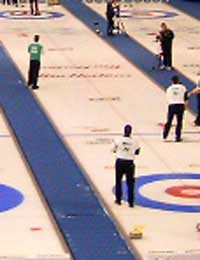 With snowboarding and skydiving among his favourite pastimes, 32-year-old Adrian Macfarlane knew there was a risk his sporting exploits could one day lead to a nasty injury. What the civil servant did not expect, however, was to end up in hospital after a curling accident.

To the casual observer, curling is, for the most part, a relatively tranquil sport played at a fairly sedate pace. Despite this, there are plenty of dangers. It is played on ice, so there is always the risk of a fall, and the curling stones are made of pure granite and can weigh up to 44 pounds.

“I do like some of the more extreme sports,” said Adrian, who lives in Perthshire. “The funny thing is I’ve never suffered any more than the odd bruise from snowboarding or skydiving. Curling is safe most of the time, of course, but I broke one of the golden rules. I went out onto the ice for a match after I had consumed a bit too much alcohol. As a result, my balance was impaired.”

It can take new curlers time to find their feet while moving or standing on the ice and beginners can fall on occasion, but most can get around without too much difficulty after a few games. Adrian has plenty of experience on the ice, however, having taken up the sport as a teenager.

“I play for my club in a local league and I had not missed a match for more than five years,” said Adrian. “So even though I had been on a very good friend’s stag night on the Saturday, I was determined to play the league match on the Sunday.”

“The problem was that the stag night did not finish on the Saturday, but, as these things tend to do, spilled into the small hours of the Sunday. There had been a fair bit of alcohol on the go and, to be perfectly honest, I was in no fit state to be curling.”

“I managed to convince myself and the other members of our rink otherwise, however, and we were actually winning the match when I had my spill. What you must remember on the ice is that even a slight dulling of your senses can leave you vulnerable, as I found out the hard way.”

Adrian was talking to a member of the opposing rink at the tee line and was just sidestepping a stone when he lost his footing and fell, cracking his head against one of the granite stones in the house.

“Curling shoes have different soles – one is a gripper, the other a slider,” explained Adrian. “I brought my weight down on the slider and lost my balance. There was a nasty cut in my head and quite a lot of blood on the ice. I was told it looked quite dramatic, but I can’t remember much of it.”

“I was taken away in an ambulance and had to get stitches at the hospital and it was all a bit embarrassing. So was the fact that there was a mention of my accident in the local newspaper. I had to explain to everyone that the cut on my head was due to a curling accident, which did take a bit of explaining.”

“Worst of all, I had landed really awkwardly on the ice and twisted ligaments in my knee. That meant there was no snowboarding, skydiving or curling for a while. I guess I was just lucky that there was no permanent damage, other than a small scar on my forehead.”