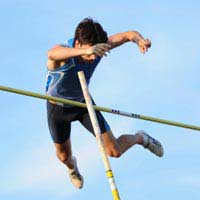 Pole vault is arguably the most technically demanding track and field event of all. World class athletes can make it look effortless as they glide over the bar, but get it wrong and an athlete risks serious injury. Bobby Templeton was a rising star in the sport until an accident wrecked his chances of reaching the top.

“I was 17 at the time and had been keen on track and field ever since my dad took me to see an international meet at Crystal Palace when I was 11,” said Templeton, who lives in London. “I had just started to focus on the pole vault, as it was my best event.”

After a long winter of gym training, running and pole vault drills, Bobby was desperate to get back to his local club to practise the event for real. “I had arranged to meet my coach to work on my technique,” he said. “I can remember it very well. The sun was shining, but it was early spring and it was still chilly.”

“I had done a longer than average warm-up and the first few vaults had gone very well. There was a definite improvement and I felt all the training I had done over the winter was paying off. Of course, I was still developing physically and becoming stronger and that helped improve my performance too.”

“Because I was feeling so good, I decided I would push myself by gripping the pole a little higher. I remember the run-up being smooth and I planted the pole in the box perfectly. I drove through the pole and swung my trail leg through.

“My feet and hips were above my head, but as I pushed up towards the bar I lost my grip and came crashing down on my head, missing the landing pit and hitting hard ground. For pretty obvious reasons, I cannot remember too much after that.”

“My coach was extremely worried, because I was knocked unconscious and it took a long while for me to respond. An ambulance was called and I was rushed to hospital and given all the usual checks that follow a serious head injury.”

“Luckily I was okay and there was no lasting damage whatsoever, but like with all sports, a lengthy spell on the sidelines is compulsory following a concussion. I was in no hurry to rush back and sat out the remainder of the season. I did train the following winter, but I had lost my confidence following the accident and bowed out of the sport when it became obvious I was never going to be able to enjoy it the way I once had.”

“In a lot of ways I am extremely lucky as it was a narrow escape. Pole vault can be an extremely dangerous sport and young athletes have been seriously injured or even killed in accidents in the past. Nowadays even watching the event makes me feel a bit queasy, so I know I did the right thing by quitting when I did.”