Ten of the World's Most Dangerous Sports 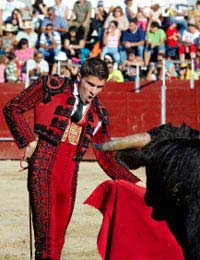 All competitive sports, by their very nature, particularly at professional level, carry some form of risk, whether through clashes between opposing players or because there is the potential for an individual to fail to recognise their own physical limitations. However, there are some pursuits that the majority of people wouldn’t have to think twice about shying away from. That’s not to say this top 10 should be avoided at all costs – many people have competed in them and walked away without a scratch – but even their biggest devotees would have to admit that they do carry some degree of danger.

Synonymous with Spain but also popular in Latin America, the balletic poise of the man or woman with the red cape may look relatively easy, but in reality requires years of training in order to practice at the highest level. Not surprisingly, it also requires a great deal of courage given the large piece of living beef, complete with horns, that is charging towards the individual in question. The sport remains hugely popular, but is also reviled by those who label it cruel.

Man and machine in perfect harmony, and arguably a far more exciting spectacle than Formula One by virtue of the fact the competitors are more exposed than their compatriots on four wheels. The likes of Jorge Lorenzo and Valentino Rossi have made MotoGP one of the highest profile sports in the world, but the speed and skill upon which this popularity is built also have the potential for fatal consequences.

The most popular winter sport for enthusiastic amateurs and families alike, the majesty of the white landscape that forms the backdrop for skiing should not seduce individuals, whatever their skill level, into ignoring the dangers that are inherent in hitting the slopes, from broken ankles and upwards in terms of severity.

Exciting, brash, loud and colourful, this celebration of athletic poise and brute force has spread its popularity beyond the shores of the United States. Despite the array of protective equipment that is part and parcel of competing, this is not a sport for the faint hearted.

In common with skiing, diving is right up there in terms of boasting a backdrop of natural beauty. Investing in the right training and equipment, and buddying up with an experienced diver greatly reduce the risks, but interacting with Mother Nature is never predicable.

With only an elasticated chord between an individual and oblivion, many people don’t have to use the excuse of not having a head for heights to give this sport a wide berth. You can run through every equipment check in the book and it still wouldn’t be enough to persuade many to head out into the wild blue yonder.

In common with Bungee Jumping, there is the irresistible force of gravity at play here. The good news is that given the number of professional teams offering displays and competing in competitions around the world, the spectacle can still be enjoyed with your feet firmly planted on the ground.

You don’t have to set your sights on Everest or the Matterhorn in order to enjoy climbing, but the fact that lovers of the sport are always up for the next challenge means it attracts risk takers. That’s not to say they don’t train properly or are not fully versed with correct procedure, simply that their exposure to the elements means that even accounting for years of experience and having attained a high level of skill, they are always in the lap of the gods to some extent.

Horse RacingYou only have to hear the thunder of the hooves to appreciate why horse racing is such a popular sport. The visual splendour of the magnificent four-legged specimens that come out of racing stables is equally seductive. But would you want to jump in the saddle? Even the greatest jockeys in the history of the sport have tales to tell of serious injury. Odds on, most people would opt for watching from the stands and restrict their level of risk to a few quid at the bookies.

How People With Epilepsy Can Enjoy Sport

Seated Exercise for the Elderly