Home > Ask Our Experts > Should I Go Skiing With Damaged Ligaments?

Should I Go Skiing With Damaged Ligaments? 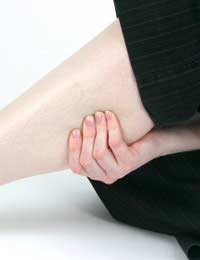 My daughter sprained the ligaments of the outer part of her ankle 8 weeks ago. It is making good progress and is about 60% repaired she is due to go sking for the first time in a 2 weeks time.

We can get our money back so there is no issue over the financial loss. The issue we have is should she go will it create a long term problem and how susceptible will she be to additional injury whilst there?

Firstly, even when ligaments suffer a relatively minor sprain, full recovery can take up to a year. The inflammatory phase lasts only three to five days – this is when the ankle would have been swollen and painful. With rest, the repair phase starts after three days, in which blood clotting and blood platelets start to begin the process of healing. Fibroblasts, the cells that produce collagen, start to divide and produce immature collagen for this initial healing period, which lasts about three weeks.

After this, the immature collagen, also called type 3 collagen, must mature into type 1 collagen and become aligned so that the ligament returns to its original strength. In young people, this happens quite successfully but full recovery can take a year. Eight weeks is certainly not long enough for type 1 collagen to have been produced in sufficient quantities to produce ligaments that are as strong as they were before.

During this remodelling period, physiotherapy and controlled exercises to increase movement and function are great – but it is probably not advisable to put the ankle under the stress of an unfamiliar exercise. If your daughter has not been skiing before, she is unlikely to be skiing very fast, but even a simple tumble could result in serious ligament injury again. Skiing injuries are common and if the ligaments were strained again, the new injury would be worse than the first, and could, potentially lead to long term damage and ankle trouble in the future. If your daughter is relatively young, to risk a life time of difficulties with a permanent ligament injury for the sake of a short skiing holiday would be a shame.

However, as we said at the outset, your own doctor is in a much better position to say exactly what the risks are. Please do seek his or her advice and if your doctor thinks there is any possibility of further damage to the ankle, perhaps you should seriously consider postponing or cancelling the holiday.

Caving and Confined Space Training: What is Best Practice?

Is my Grandson Safe to Bungee Jump?

What Are the Rules on Children and Gym Equipment?