Home > Ask Our Experts > Is my Grandson Safe to Bungee Jump?

Is my Grandson Safe to Bungee Jump? 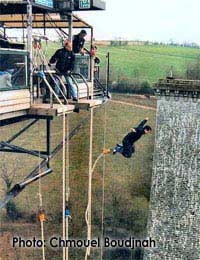 My grandson now 16 and wishes to Bungee jump for sponsorship however he was born with hypermobility and his joints would often get stuck out of position during his childhood. At 16 the occurences are rare but I am concerned that under the thrust of bungee jumping there would be a greater risk of injury. Would this be the case?

Whilst properly regulated bungee jumps are usually perfectly safe, the nature of the activity means that people with certain medical conditions will often be excluded from taking part because of concern for their own safety and because of insurance and liability reasons.

Your Grandson should seek advice from his GP who will have a full medical history to refer to in order to ascertain the risks and to determine whether or not it’s advisable for him to jump.

Various companies who run bungee jumping events have different sets of criteria in determining whether or not a person is medically fit to jump. Certain groups at risk include pregnant women, people with high blood pressure, heart conditions, neurological disorders, epilepsy and those with acute chronic knee, back or bone disorders.

This does not necessarily mean that people who fall into any of the above categories will be prevented from jumping. However, for your own Grandson’s safety, it is important that he informs the company which are running the event and explains the situation to them. They will be able to tell him whether or not they might be prepared to let him jump and, if so, what he should do next and let him know about any certificates or paperwork he may need to produce.

It may also be worthwhile him contacting BERSA which stands for the British Elastic Rope Sports Association which regulates the activity of bungee jumping and is responsible for ensuring that the highest safety standards are maintained at affiliated clubs who run bungee jumping events.

The Hypermobility Syndrome Association is another organisation that your Grandson may wish to seek advice from.

Remember, however, that bungee jumping is an extreme sport that can place a lot of wear and tear on even the fittest people and it is not without its risks so it’s important that your Grandson listens to all the advice and acts upon it. And, the fact that you pointed out that in spite of rare occurrences since childhood, his joints would get stuck out of position earlier in his life would seem to suggest that extreme caution and a professional medical opinion is of paramount importance here.

Caving and Confined Space Training: What is Best Practice?

Should I Go Skiing With Damaged Ligaments?

What Are the Rules on Children and Gym Equipment?