Home > In the Air > Gun Safety 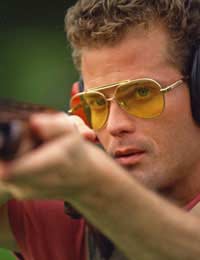 The sport of shooting is one of the fastest growing sports worldwide. And when proper precautions are taken, the sport is very safe.

No matter the type of gun or purpose for its purchase, the owner must take firearm certification courses, which cover everything from rules for safe gun handling to identifying different types of firearms; cleaning and storage of firearms; shooting skills; firearms and the law; selecting a firearm; as well as sport shooting activities and training.

The fundamentals of safe gun handling are as follows:

When not in use, a gun should be safely stored away from young children and anyone not properly trained to use the firearm. If for some reason the gun is not stored in a secure location, it "should have the action locked open so that anyone may inspect the chamber and magazine for live ammunition," according to PUN.org.

Know the target and what is beyond it when taking aim. As well, ensure the gun is safe to operate; use the correct ammunition; and never use alcohol or over-the-counter medications, prescriptions or other drugs prior to or while shooting.

When carrying the firearm, the best way to control the muzzle is to always have it in view.

The firearm must be unloaded prior to cleaning.

There are three main types of guns - pistol, rifle and shotgun.

Pistols are lightweight and designed to be fired while being held in one hand. There are numerous types of pistols, with the most popular being rim fire, centre fire and air. Air pistols, according to Potter Firearms, are the best type of pistol for honing one's shooting skills "as the complete lack of recoil means you see the sights go WHOOPS as the shot breaks."

Pistols are often used in target shooting matches, which are highly regulated. Safety gear that must be worn include hearing protection such as ear muffs, eye protection like safety glasses, and enclosed shoes. "Shells are very hot and burn mightily when ejected from a semi-auto," according to Potter Firearms.

When it comes to first-time gun owners, many clubs require the firearm to be no larger than 22 calibres for various reasons, including skill development - particularly trigger control.

"Learning to squeeze the trigger while not upsetting the pistol means you must get some feedback through the sights if you are to pick up the snatching or pulling phases we all go through," according to Potter Firearms. "The more recoil, the less likely you will see anything."

A shotgun is a long gun designed to be fired with two hands. It has a smooth bore - the barrel's interior - and can fire a variety of ammunition types, including a solid bullet (slug) and multiple projectile (shot). Shotguns are primarily used in bird hunting, trap and skeet shooting.

Rifles are also long guns and meant to be fired with two hands. It has a rifled bore and is intended to shoot a specific size of ammunition.

Rifle sport shooting is divided into three categories - small bore, full bore and air rifle, which are most often used in game hunting as well as in long-range marksmanship competitions.