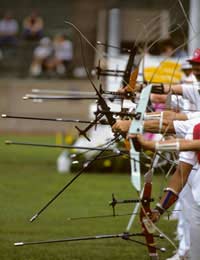 Archery is a sport that the whole family can participate in, it's skilful and enjoyable. There are different types of archery, target archery being the one you're probably most familiar with. This involves firing a set number of arrows at large round targets (Bosses) from different distances.

Field archery normally takes place in woodland where targets representing, birds, animals, and even sometimes mythical creatures are set up around a set course.A group of five archers follow each other at a safe and monitored distance around the course and have to hit the targets.

Clout shooting is a form of archery where a target is placed on the ground face up and shot at from a distance as far back as possible. In competition the distance is 180yds for men and 120yds for women. The arrows are fired skyward in the hope that they hit, or at least land somewhere near the target.

No matter what form of archery you participate in it's important to remember that a bow if used carelessly can cause serious harm and safety rules should be applied whenshooting. A common sense approach to safety should always be taken, and no one should be put at any risk by foolish or inconsiderate actions.

These hints are by no means the only safety aspects of archery you will need to be aware of to make your day enjoyable and free from incident, but they will help in making you aware of the commonsense attitude to safety that needs to be adhered to when shooting.