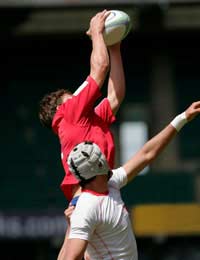 Rugby is a fast moving game that involves a lot of physical contact and it's more than likely if you play the game regularly you'll end up with one type of injury or another.

Upper and lower limb muscle strains and injuries are common as are finger and hand injuries. The scrum if it collapses is an area where extremely serious injuries to the back and neck can happen .Where rugby differs from sports like football is the amount of upper body contact that takes place during a game. It's normal for players running at pace to be charged into and tackled with considerable force.

The impact can not only cause immediate injuries, but the cumulative effect during a game of a number of these tackles saps the strength, and makes the player more vulnerable to injuries. Because of the contact that is made during a game there is a need for some protective kit to be worn this may include:

If we look at when injuries take place during a game we find that the majority happen in the last third of a match. There's no doubt that fatigue plays a large part in these injuries. As muscles get tired muscular output force drops and they find it harder to protect themselves and surrounding ligaments and bones. There's also a suggestion that the lack of a proper warm-up at the start of the second half may contribute towards the high rate of injury during the second half of games.

With the knee being the area where the most severe injuries happen, and the leg in general being injured frequently we can try and reduce the risk of injury in this area by targeting the legs for specific training.

While this is by no means an exhaustive list, it may help you build the strength in your legs that will prevent you picking up injuries late in the game.

Why not give it a TRY.