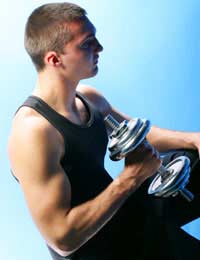 The following is a brief guide to supplementing with the ergogenic aid creatine.

Creatine is a natural substance made by the body, found mostly in muscle tissue. Because of its role in energy generation and exercise recovery, it has become popular as a sports supplement - or ergogenic aid - particularly among those who wish to increase strength, endurance, and lean body mass.

The following are the natural functions and activities of creatine, and how they may be particularly attractive to athletes:Several studies have been conducted based on the above properties to see if supplements could improve the performance of various sports activities. While these were not considered of adequate power or quality to draw firm conclusions, most yielded at least mild benefits.

Creatine is available in foods, specifically meat and fish; the typical diet provides about two grams per day. As a supplement, it is available in powder, capsule, tablet, bar, chewable gum or liquid form. The following should be considered during selection, and clearly labeled on the product container:

Most traditional creatine programs are based on the following, believed to increase muscle creatine by an average of 20%:However, recent data have suggested that such high amounts may be unnecessary, showing results with the following: While the reliability of the degree of increase is not known, it has been confirmed that muscle has a saturation limit. This means that increasing intake of creatine will not result in increased storage, rather in excretion of the excess. For this reason as well, the benefits of continued supplementation beyond one month have not been consistently observed. The following is therefore recommended for long-term use, assuming regular physical training:While the loading phase is not essential, it has been observed to shorten the time to results by 50%.

No serious side effects have been reported in healthy people who follow the traditionally recommended dosing guidelines for creatine supplementation. However, the following should be noted:
Next Page