Home > Getting Started > Quiz: Test Your Knowledge of the Basics

Quiz: Test Your Knowledge of the Basics 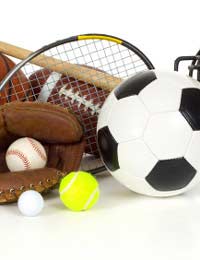 Sport is all about healthy competition – and the accent should be very much on healthy. This means that safety should be paramount in order that no individual’s well-being is put at risk. Unfortunately, from time to time, accidents do happen despite the fact there are procedures in place and special equipment available to minimise the risk. So how good is your knowledge of what is, and isn’t, best practice both at professional and amateur level, as well as some of the injuries that can occur? This quiz consists of 15 questions that will test you and your friends’ knowledge, but leave no-one nursing anything worse than a bruised ego.

1. Australian batsman Graham Yallop became the first cricketer to wear what piece of safety equipment during a Test match in 1978?

2. Which footballer popularised metatarsal as a description for a broken bone in the foot following a tackle in a Champions League match that threatened his participation in the 2002 World Cup?

3. What is the common name of the turn used in sailing to return to a spot where a person fell overboard?

4. Air technology was hailed as a breakthrough in sports footwear, providing runners with built-in cushioning designed to alleviate the impact on joints from running on hard surfaces. What was the name of the world-famous manufacturer that brought this technology to the high street?

5. What is a football referee required to check each player for before a game is allowed to proceed?

6. In climbing, what is the name of the technique whereby friction on a rope is used to ensure the safety of a buddy?

7. Which ball game is most closely associated with the condition known as cauliflower ear?

8. In public swimming pools, the practice of running fast along the edge before jumping into the water with the knees tucked into the chest is banned on safety grounds. What is the common name for this practice?

9. Which rule in boxing has been adopted as a phrase in everyday vocabulary, meaning words or actions intended to cause great discomfort or hurt to another?

10. What is the piece of gym equipment designed to offer a controlled and combined upper- and lower-body workout?

11. What piece of protective equipment is every player on the rugby field required to wear?

12. Tenderness experienced in the upper limb and caused by repetitive action during racquet-sport play is commonly referred to by physiotherapists as what?

13. What is the most obvious difference between competitors in an amateur and professional boxing bout?

14. According to the England and Wales Cricket Board, research has shown that which type of player is most susceptible to injury?

15. Tackling is strictly forbidden in this form of rugby. What is the name of the game concerned?

Are You Wearing the Right Footwear?