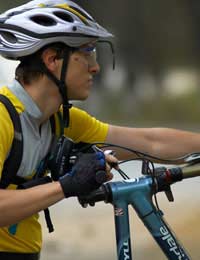 Be seen, be safe. Succinct and to the point, which is why this particular little catchphrase has been adopted by a number of agencies anxious to get the message across to young and old alike that less daylight hours means taking more care when interacting with motorised traffic, whether you be a pedestrian or on two wheels.

Cyclists, it is fair to say, are in the most danger because unlike individuals getting from A to B on their own two feet, they will be sharing Tarmac with two- and four-wheeled motor vehicles to a much greater degree.

The sound advice disseminated through TV adverts, leaflets and websites rightly includes information on the different types of reflective clothing and reflective accessories for the bike that can make cyclists much easier to spot through the windscreen of a car, truck or motorcycle.

Whether that be jackets, additional lights, ankle or helmet bands, there is no doubt that a little investment can go a long way towards making life much safer on the morning or evening commute, or on those cloudy weekend mornings when the relative lack of traffic on the road can lead to a false sense of security – remember it only takes one vehicle to leave a cyclist injured so the fact that there isn’t much to report on from the ‘eye in the sky’ isn’t an excuse for complacency.

However, there is more to staying safe in the winter months than simply investing in reflective gear. After all, it is only as safe as the person that wears it, so rather than assuming drivers will take evasive action simply because you are lit up like a Christmas tree, adopt a regime of defensive cycling.

First of all be sure your eyesight is sharp – vision is compromised as the amount of natural light diminishes, so even if you believe you boast 20:20, book an appointment with an optician to be sure. If you are already a lens wearer – be that glasses or contacts – you should be taking regular tests in order that whoever is responsible for your prescription is happy that it accurately reflects the current state of your eyes.

Ok, so your vision is up to scratch. So use it by looking around as often as possible to check the road position of other vehicles. This will allow you to make adjustments where needed to keep as much distance between your bike and vehicles in front, beside you and behind, as well as help you plan ahead if, for example, you are approaching a junction or need to make a left- or right-turn.

Adjust your speed to the road conditions. The surface is more likely to be treacherous – the result of rain, frost, or ice –than during late spring and summer, so don’t be tempted to try your luck. If you need to ride more slowly, do so; don’t be intimidated by drivers behind you. And don’t react to their impatience with hand gestures – don’t play the innocent, you know the sort of thing – as this may simply make you a target. There’s often enough mist around without you contributing a spot of the red variety that will steam up the windscreen of the driver behind.

It is a good idea to look at your schedule, too. Is there, for example, the opportunity to delay your morning ride to work by half an hour, or on occasion leave the office earlier, in order to maximise the amount of daylight you are riding in? Explain the situation to your line manager as they may be amenable to you completing one or two tasks via your home internet connection in the morning or evening.

If time constraints don’t allow for a change in your cycling schedule, think about alternative routes that reduce the amount of interaction with road traffic or involve negotiating less busy roads, always remembering that as already mentioned, less busy doesn’t necessarily mean less dangerous. This goes for interacting with pedestrians, too, so even if cutting across the park means missing a couple of busy junctions, don’t forget that the presence of dog owners, joggers, school children and senior citizens also requires riders to take care – and it isn’t just your own safety that is the issue here given you are likely to be travelling at a greater speed than them.

Deteriorating weather conditions and less daylight doesn’t mean that cyclists should be restricted in doing what they love best – climbing onto their saddle. Rather, it comes down in the end to the right clothing and plenty of commonsense. Be seen, be safe? Too right! But don’t forget to be smart, too.