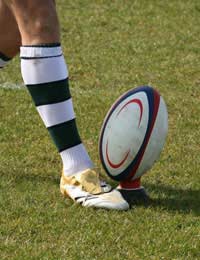 The essence of great rugby play is ball handling passing, movement and anticipation. These are attributes possessed by the best players in the world. Of course, there is another side to the game, that of physical contact in the form of tackles that can make the eyes water just witnessing the ferocity of the impact.

It is this level of physical contact that turns many people off the sport. Many women, for example, don’t see the fun in hitting an opponent hard in the tackle, while parents may wince at the thought of their children being exposed to bumps and bruises and the occasional bad injury.

This is not to suggest that rugby is intended to be a violent sport. Rather it is one that encourages participants to play hard but fair. Nevertheless, those who feel uncomfortable with the intensity of this contact sport can still enjoy its principle disciplines by playing Touch Rugby. As the name suggests, contact is restricted to a touch that replaces the tackle as the means of dispossessing an opponent. The sport originated as a warm-up exercise that would not leave players exposed to injury before the main event had begun. As such it retains, the passing and movement as well as the ultimate goal, namely to score a try.

Touch Rugby is great fun to play, a fact borne out by the rapid rise in its popularity in recent years. It can be played casually by a group of friends on any piece of parkland, but the formation of local clubs both in the United Kingdom and across the globe has widened the appeal of the sport even further. In turn, there are now both national and international tournaments and a governing body, the Federation of International Touch (FIT). South Africa hosted the federation’s sixth world cup earlier this year, which saw Australia retain its championship crown.

Not only is Touch Rugby played by single-sex teams, but there are mixed matches, too, making it even more accessible for both friends and family who want to play sport to have fun and improve their health. Mixed teams also compete at organised events, too, so they can provide a springboard for those who wish to take the development of their skills a little more seriously.

An Exhilarating and Safe Sport

Good fun and positive competitiveness are also the attraction for parents, teachers and coaches who view Touch Rugby as an exhilarating and safe sport for children to participate in. Not only can it be enjoyed in its own right, but it can serve as grounding in the arts of either of rugby’s two codes: league and union.

Both adults and children who are turned off by football’s round ball can find plenty to shout about by turning instead to the oval ball. And while they can thrill to the exploits of the top international players on TV or from the stands, by playing Touch Rugby they don’t require any of the big boys’ physicality in order to get a piece of the action on the pitch themselves. In essence, it’s all gain without any of the pain. Sounds like the perfect match!